Falling Off – Then Letting Go 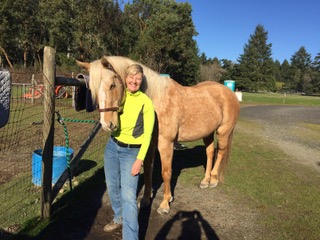 Falling Off – Then Letting Go

One of the best gifts I ever received was when I was in 4th grade.  It came from my Aunt Faye.  Aunt Faye was my favorite aunt.  She was my mother’s twin sister so I always believed we shared a connection closer than simply aunt and niece.

That year, for my birthday, she gave me 10 horseback riding lessons.  She was decades ahead of her time in gifting “experiences” rather than just “stuff.”  I was thrilled.  I had always loved horses but my experience was limited to the annual County Fair pony ride and an occasional trail ride or two.  I am happy to report that the lessons continued for 8 years, although Aunt Faye stopped paying.

I was one of those super lucky girls, who for her 16th birthday, got what she always wanted.  My parents bought the horse, Robin, that I had been riding at Triple S Stables in Grand Bay, Alabama.  He was a gorgeous big red Saddlebred type who wanted to please, looked amazing at the trot, and hated the squeaking of raincoats or the opening soda pop cans.  I took Robin with me to Girl Scout camp in the summer and ran the riding program for the campers.  When I went off to college we sold him to another goo-goo eyed 16 year old and I hope she loved him forever.

Riding became more sporadic. The first college I attended offered a degree in “Equestrian Science” but my father made it clear that he was not going to pay for a degree in horses.  I did take a few equitation and stable management classes but mostly rode during the summers when I continued to take camp counseling jobs working at the stables and teaching kids to ride.   During a few vacations after college I found myself on a western saddle, riding VERY slowly down a windy trail behind another trail horse and wishing I could do more. My largely urban civil rights career didn’t mix well with riding.

The years rolled by and in 1997 when we moved to Vashon I thought that I would immediately start riding again, given that horses and equestrians are plentiful on the Island.  I took a few lessons but was unable to find a barn atmosphere or instructor that suited me.  However, in 2017 I was feeling more hopeless about the world and decided it was finally time – I was getting back in the saddle to do something I loved.  I showed up at Bay Breeze Farm, met Joe (the owner and instructor) and scheduled a lesson.

Well, given my bio (above) I thought I knew a thing or two about riding, but not really.  The style of riding I had done as a child was different and now my arms, legs and seat were not getting the results I wanted.  But that didn’t keep me from going fast – or as Joe put it, “bombing around the ring.”  But, you know, I thought I was a good rider and had nothing to worry about.

Joe suggested that I ride a horse named Jax.  She is big and beautiful and seemed like she might be a good match for my skills.  I was trotting along, unconcerned, when my helmet hit a tree branch and the branch snapped.  Jax spooked and headed down the arena in an instantaneous burst of speed.  I could not hang on and hit the ground in a split second.  Wow!  What just happened?  I don’t fall off.  That is not me, that is not what I do.  I was a bit bruised and embarrassed but otherwise OK.

Later in the summer of 2019 I was on Jax as we headed out of the arena to the trails behind the barn.  I did not have a good connection to her when she was startled by something in the woods.  She pivoted around and I went off her right side onto the ground.  I couldn’t believe it.  What was happening to me?  Who am I?  Definitely not the rider I thought I was.

The next week was very difficult.  I had to acknowledge that riding at age 59 is much different than riding at age 16.  You lose the ability to bounce and can be seriously injured in a fall.  Horses are unpredictable. I had not been ready to accept these realities.  I did not want to accept the truth of my aging and changing body.  I was forced to let go of multiple stories in my head about whether I was a good or bad rider and instead focus on whether I would risk injury for the sake of riding.

After a few weeks off, I started riding Jax again and we are still taking it day by day.